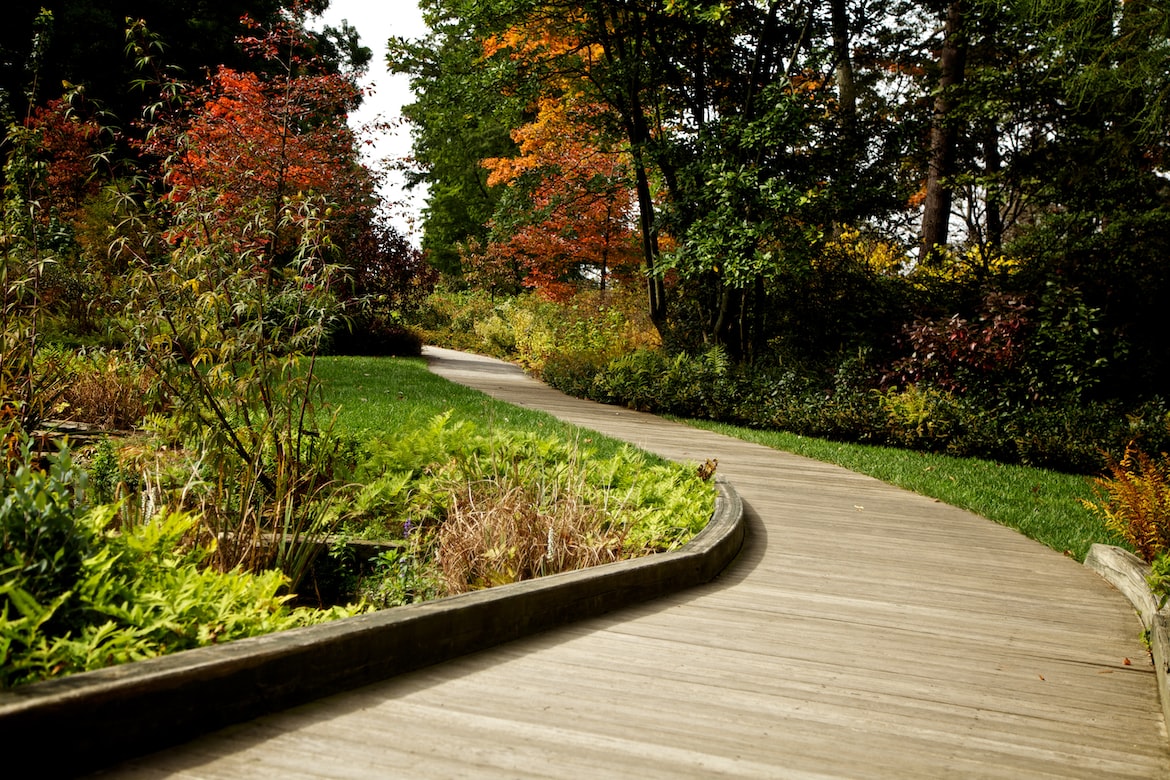 Our towns and natural settings have been molded and characterized by some of the most significant landscape design initiatives ever undertaken.

This previously industrial waterfront has been rejuvenated by the 85-acre Brooklyn Bridge Park. A variety of events and programs are held in the park, which acts as a link between the city and the river and offers spectacular views of the Manhattan skyline. Because of the site's rich history and exceptional built and natural traits, this major transformation will result in an urban attraction that is dynamic and engaging for many years to come.

An old parking lot in downtown Seattle was transformed into an ecologically and socially sustainable center for global collaboration and local engagement by Gustafson Gustafson Gurie Nichol Landscape Architecture. It was designed by landscape architects in accordance with the Foundation's vision of having a global purpose with a local roots to serve as a ground for bringing together employees and regenerating the surrounding neighborhood.

Project participants were motivated by the Foundation's stated goal of "enabling all people to enjoy healthy, productive lives," which served as a foundation for all of the team's actions. Foundation members were asked to design and build a campus that would serve as a resource for the Foundation's international staff and tourists while promoting the Foundation's local and worldwide aims.

The landscape architecture firm of Paul Thompson and Taylor Cullity Lethlean, founded in 2012

The style was created in collaboration with Taylor Cullity Lethlean and Paul Thompson. This is the world's largest botanic garden dedicated only to Australian flora, and it was made possible by the creative use of landscape design. The museum's goal is to pique people's interest in plants and their natural environments by presenting them with engaging, immersive experiences. Many Botanical Gardens are rethinking their research and recreation paradigms following the completion of the Australian Garden, focusing on landscape conservation messaging and re-engaging visitors in meaningful ways.

Species of all kinds are now on display at the Australian Garden, the world's largest botanical garden dedicated to Australian plants. This is a valuable resource for both researchers and the general population. To maintain the world's biological heritage, this policy acknowledges the importance of biodiversity and the necessity of protecting species and ecosystems.

Gardens by the Bay, 2012, by Grant Associates

It was in 2006 that a winning team led by Grant Associates was selected to design Singapore's Gardens by the Bay's 54-hectare Bay South component. The unique indoor and outdoor horticultural attractions of the gardens, finished in 2012, draw more than 12 million visitors each year.

Singapore's national flower, the orchid, serves as the inspiration for the master plan's exotic gardens and intricate energy, water, and waste management infrastructure.

In 2012, the Queen Elizabeth Olympic Park was designed by Hargreaves Associates and LDA Design

Parks have been a part of British culture for centuries and the design of Hargreaves Associates and LDA Design's new park takes into account the problems of reusing post-industrial brownfield areas and the most recent concepts on sustainability and resilience. Among the park's features are an environmental park in the north and an Olympic Gardens-themed festival park in the south, where the participating nations' gardens may be located. For park programs and biological landscapes, the Transformation Plan substituted removed paving and athletic arenas, laying the basis for a regenerated park that would inspire future generations.

The Meatpacking District of Manhattan was turned into a public park named the High Line by James Corner Field Operations, Piet Oudolf, and Diller Scofidio + Renfro. In addition to providing an unusual vantage point from which to see the city's hectic streets, this linear green lung also provides a few pleasant surprises along the way. Because of its popularity with tourists, the area around it has seen an increase in property values, unintentionally.

Field Operations designed and built the five-acre Central Green at the Philadelphia Navy Yard Corporate Center. One of the city's most innovative and forward-thinking commercial districts is located in the region that was once a swamp, a meadow, and a bird sanctuary. Since the design is both social, active, and urban while also being environmentally friendly; it produces a new type of atmosphere that is both social and natural. There is an expansive social track of 20 feet wide that acts as a framework for the site's unique, immersive inner park, which features floral meadows and an outdoor amphitheater as well as a bocce court and training stations.

Carve and Omgeving in the landscape In 2016, be-MINE

The team of Carve and OMGEVING (design) won an international competition in January 2015 for designing an exciting playground and landmark on a 'terril' near Beringen, Belgium. It is part of the be-MINE project, which aims to rehabilitate Flanders' largest industrial-archaeological site, the Beringen coal mine. The 60-meter-tall rubble mountain needed a new purpose, and the old industrial buildings needed to be repaired so that their history could be enjoyed and learned from.

In Limburg-Flanders, this is the only place of its size and significance, with its comparatively flat surroundings, towering heights, and industrial past. Despite its massive nature, the game's playable character shows the modesty of a child. As part of the design process, an emphasis on industrial-era ideas led to the creation of an unmatched playscape.

Garden areas with alder and birch forests that act as a barrier between the new public realm and a fully planted setting are included in Gillespies' landscape design project for NEO Bankside in 2015.

An identity for the site has been forged via the use of planted berms, pebble-lined moats, stone-lined cuts, and narrow paths, all of which contribute to the tranquility of the manicured gardens, which feature an orchard fruit trees and a herb garden.

As sea levels rise and storm surges increase, low-lying towns throughout the world are bracing themselves for urban flooding disasters. Due to a combination of increasing sea levels and the city's increased reliance on concrete infrastructure, Bangkok is losing two millimeters of elevation per year.

For the first time in 30 years of rapid urban growth, a key property at the core of Bangkok—11 acres of land and 1.3 kilometers of road—was not converted into another commercial block for commercial uses. Instead of decrepit structures, new public parks are being constructed. As Bangkok's first big piece of green infrastructure, Chulalongkorn Centenary Park opened to the public in 2017 and aims to mitigate unfavorable environmental conditions and reduce disaster risk. One of the first parks in Thailand to demonstrate how a park can help a city reduce urban flooding and prevent climate change while also giving city residents with a place to reconnect with nature once more. In order to teach the city how to live with water rather than fear it, innovative ecological design components were incorporated to build the park